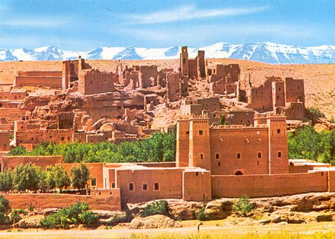 Addressing the problems of vision at an international level, intervening where possible to prevent blindness by supporting developing countries. In this spirit IAPB Italy participated in the 14th Afro-Asiatic Congress of Ophthalmology that was held in Marrakesh from 20th to 25th June 2007. Among the themes discussed at the congress were retinal diseases, glaucoma and other eye illnesses.

A meeting of the board of the Task Force for Low Vision for the Mediterranean was held as a part of the Afro-Asiatic congress. During the session dedicated to this meeting on 24th June, several reports were presented, which dealt with various themes, such as visual impairment awareness, the role of the ophthalmologist and orthoptist and the rehabilitation of patients suffering from age-related macular degeneration (AMD).

IAPB Italy also participated in the IAPB-Emro session (with the countries of the Middle-East), during which proposals for aid were launched on the basis of the requests that emerged and the needs of the various States.

IAPB Italy carries out a vigours fight against blindness, with particular determination in the Mediterranean area and developing countries. With this in mind, at the end of 2005, an agreement was signed between, on one side, IAPB Italy – represented by President Giuseppe Castronovo – and OAPAM (Morocco’s Alouite Organisation for the protection of the Blind), and on the other, the Morocco Ministry of Health. This agreement provided for the financing of various ophthalmic equipment for the two centres in Rabat (Moulay Youssef hospital) and Tangiers (Kortobi hospital). In short, it is a cooperation agreement that aimed to combat blindness by providing appropriate equipment for eye examinations and cataract surgery, a disease that can lead tolens opacity.

The project was part of a global fight against blindness, which aimed to eliminate the avoidable causes by the end of the decade (Vision 2020: the Right to Sight first, “Universal Eye Health: a Global Action Plan 2014-2019” by WHO later). This strategy was adopted and applied with conviction and strength by IAPB Italy.

On 15 November 2016, the World Health Organization (WHO) acknowledged the elimination of trachoma as a public health problem in Morocco (read more).

Among developing countries, Morocco itself represented a very successful model of healthcare strategy and planning of interventions in the fight against avoidable blindness. The trachoma control program was one of the most important practices.

Furthermore, the adoption of a national blindness prevention program, VISION2020, and of a national committee, ensured the identification of intervention priorities and the unity of action to curable blindness.

The financial commitment, which run from 2006 to 2008, consisted of intervention projects, including the provision of ophthalmic equipment in the peripheral centres that lack instruments fo rbasic surgeries.

With reference to the campaigns for the surgical removal of cataracts , the specific objective was to create mobile surgery units for interventions in areas that were not catered for by the national health system.

The actions envisaged were as follows:
a) identification of the reference area;
b) identification of patients to be included in the program;
c) the creation of a service for visually impaired people in a healthcare facility (hospital);
d) follow-up of assisted patients.

The intention was to successfully implement the initiatives aimed at drastically improving the serious condition of the population affected by treatable blindness. This important initiative, in the spirit of international cooperation, was aimed at translating into concrete actions the right to sight of every individual, so that they could exercise their own freedom and live their lives in a dignified way: new possibilities of care had to be given, returning hope back to patients and their families.

Combating blindness also means fighting against poverty: if vision loss is prevented, a further obstacle to development is removed in countries that need to grow economically and socially.