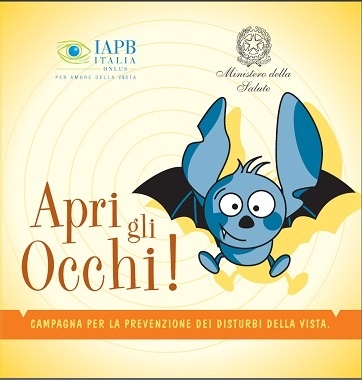 Open your Eyes on Sight

An educational campaign on sight is currently experiencing a fresh start thanks to an online digital version, which is different to the previous one. The project “Open your Eyes!” (“Apri gli Occhi!”) in fact, continues also in the 2018-2019 school year with an innovative formula: everything now takes place on a multimedia platform geared towards teachers (take part in the competition). Primary school students and children from the final year of nursery school can watch an educational cartoon on a restricted website and answer a series of questions, led by their teachers. Thanks to this game-based training, they will learn a series of medical-scientific notions.

WHO IS IT INTENDED FOR?

The initiative, which is promoted by the International Agency for the Prevention of Blindness-IAPB Italy, is geared towards school teachers: it aims to involve mainly children aged from 5 to 11 years of age, in order to teach them about sight disorder prevention through entertainment and healthy competition (a prize competition). On February 5th 2019 the prof. Filippo Cruciani – ophthalmologist consultant of the National Centre – will answer the questions of the teachers during a webinar.

The “Apri gli Occhi!” initiative is entirely cost-free for users. Originally conceived together with the Ministry of Health, it was devised and promoted by IAPB Italy. The campaign is now run, thanks to CivicaMente.

In the past, between 2005 and mid-2014, more than 310 thousand students were directly involved – with a live educational show – in close collaboration with the local sections of the Italian Union of the Blind and the Visually Impaired. If we take into consideration also the first three multimedia editions, over a decade (2005-2017) more than half a million children hailing from 1,438 schools participated in the initiative.

The “Apri gli Occhi!” campaign aims at safeguarding sight by seeking the direct involvement of young people and raising their awareness. The protagonist of the gags of an educational cartoon, is Bat, a shortsighted bat, who is the mascot of the entire campaign. All the characters – who are all animals – explain the importance of our eyes and of eye care.

A number of digital tools are also available as additional materials for classroom lessons. More specifically, the educational tools available to teachers and their classes free of charge are the DIGITAL LESSON (cartoon); the MULTIMEDIA TRAINING QUIZ; the PRIZE COMPETITION with TRIVIA QUIZ (at the time of writing the deadline for participation is April 30, 2019).

Thanks to a new educational approach, called Open Mind, the pupils are effectively involved, leaving them time to test their ideas, encouraging their cooperative learning and open discussion. The tool used is, in this case, a living book that provides different learning activities based on learning by doing in an amusing and practical horizon. A playful approach (gamification) allows, in fact, the use of elements borrowed from games in contexts of active communication. For example, participation in the Trivia Quiz game is possible at any time of day through a computer, tablet or mobile phone, always based on leisure associated with learning; in addition, a virtual meeting with experts is periodically planned to clarify all doubts.

BRIEF HISTORY OF THE CAMPAIGN

The project was launched as a pilot in 2005 in 14 Italian cities (involving more than 100 schools and about 40 thousand students). In each institute a fun and interactive scientific educational live performance was staged for the first time, with real actors. The enthusiastic reception of the students, the appreciation expressed by teachers and parents, as well as the praise from local institutions, subsequently led to the implementation of a wider project.

In the 2014-2015 school year,an interactive whiteboard (IWB) was used in all Italian regions except Val d’Aosta: the show was viewed online. In three years (2014-2017) the students from a number of Italian schools were able to watch the same scientific theatrical show streamed online, also actively interacting with its protagonists thanks to dedicated videoconferences, during which they could ask questions and receive helpful answers.

Finally, a pdf booklet containing a series of recommendations for children’s eye health is also available (Italian version only).