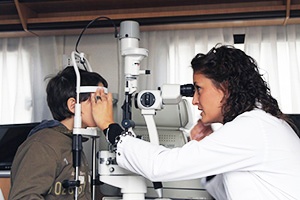 The prevention campaign continues in primary schools and in nurseries: the aim is saving the sight of the little ones

A mobile ophthalmology unit, a specially equipped campervan, is taking care of the sight of children aged from 3 to 11 years old, with a “hero” present on board: The “hero” is the ophthalmologist, a professional figure who is fundamental from an early age.

This campaign, which offers free eye exams in schools attended by very young students, was devised by the International Agency for the Prevention of Blindness-IAPB Italy and reaches many different locations.

These eye exams, previously carried out in nurseries, have been extended since 2013 to primary schools. The main purpose of this initiative is to preserve eye health through an early diagnosis, thus preventing many eye diseases.

Thanks to this campaign, thousands of young people have been examined. In just three years, Keep an eye on the children (“Occhio ai bambini”) has led to over 15,000 eye check-ups for children attending nursery schools in over 50 Italian provinces. According to data collected in twenty cities (7,754 visits), eye disorders affect about 6% of children aged between 3 and 6 years old; in this case further clinical exams are necessary.

THE MOST COMMON EYE PROBLEMS AMONG TODDLERS AND KIDS

The most common refractive error that was identified is hypermetropia, but astigmatism, strabismus and myopia may also be present. During the prevention campaign, which has been ongoing for several years, ophthalmologists examine children free of charge on board the ophthalmology unit. This way they can promptly identify any eye disorders and diseases, which otherwise could irremediably compromise the development of the visual apparatus such as, for example, the lazy eye. Parents should also monitor their children’s habits: they should not watch TV or a screen from a close distance, nor should they have a bad posture. An eye examination is important not only after birth, but also before starting compulsory schooling.

The “Keep an eye on the children” campaign is replicated periodically and has been held in a vast number of Italian cities.